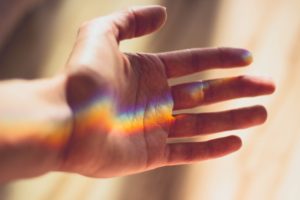 The therapeutic power of light has long been recognized and put to use by the healers of various societies.

Ancient Egyptian, Indian, and Greek physicians are known to have prescribed sunlight to treat a variety of ailments affecting the body and skin.1

Literature from the 10th century AD in China makes reference to a treatment for skin involving the combined use of herbs and exposure to sunlight.2

In the modern age, scientific exploration of the therapeutic effects of light began with the work of Dr. Niels Ryberg Finsen, a Danish physician and scientist who won the 1903 Nobel Prize in Medicine for his discovery and application of phototherapy for the treatment of skin tuberculosis. 3

Today, his ground-breaking research is widely regarded as the origin of modern light therapy science.

Since the time of Finsen’s work the development of laser and LED technology capable of emitting light of specific wavelengths, among other characteristics, has prompted a burgeoning of research and data supporting the safety and effectiveness of the use of such devices for the treatment of a wide range of health-related conditions.

Essentially, the mechanism underpinning phototherapeutic effects involves energy transfer from a light-source to a biological system.  This energy can be either constructive or destructive in its ultimate effects depending on its wavelength (colour) and intensity (energy). There are primarily three bands of wavelength known to have therapeutic properties: red, infra-red and blue.

In red light therapy, healing effects are initiated through the absorption of incident light by photosensitive proteins within the membranes of cellular mitochondria. What follows is a cascade of physiological reactions ultimately resulting in such beneficial consequences as increased cell proliferation, modulation in the levels of cell signalling cytokines, growth factors and inflammatory mediators, as well as increased protein synthesis (e.g. collagen and elastin) and oxygenation of tissue.15   In essence, through this pathway, the body’s own innate healing potential is photoenergetically stimulated.

Longer wavelengths of light, into the near infra-red band of the light spectrum, have the ability to penetrate deeper into the body’s tissues where they can produce physiological changes similar to those induced by red light. Easily capable of reaching the skin’s highly vascularized hypodermal layer, and beyond, wavelengths in this band are associated with such beneficial effects as increased blood and lymphatic fluid flow, neovascularization (the formation of new blood vessels), the reduction of swelling, and increased tissue oxygenation.18

Blue light therapy, harnesses the destructive potential of light energy through its dissociative effects on  specific molecules that are sensitive to blue wavelengths. This interaction leads to a localized accumulation of free radicals that can ultimately destroy cells that are associated with  targeted molecules. An example of this processes is found in the treatment of acne wherein bacteria responsible for the condition are eliminated following the photoconversion of molecules that they naturally produce, porphyrins, into reactive oxygen species.17

By combining the correct wavelengths of light with agents known as photosensitizers, such destructive effects can be enhanced and used to treat a variety of illnesses. 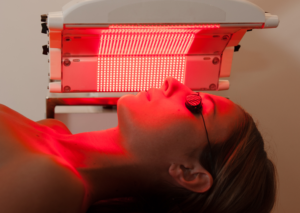 We are very excited to be able to offer state-of-the-art LED light therapy to our clients!

Currently equipped to provide red/IR light based treatments, our corresponding LED device has been evaluated and approved for safety by the US FDA and Health Canada.

With a clinically proven, FDA approved, ability to smooth and diminish fine lines and wrinkles of the face, our unit, as a powerful emitter of red and IR light, may also be of potential benefit for:

In keeping with the holistic emphasis of Chinese medicine, LED therapy at our clinic is primarily used as an adjunct to our TCM based treatments, however, under certain circumstances, our unit may also be made available to patients for treatments on a stand-alone basis.  For more information, please contact the clinic.

Candidates for light therapy treatment at our clinic are initially assessed for any health conditions that they may have for which exposure to high intensity light would be contraindicated. Following this initial screening, the area of skin to be exposed for treatment is gently prepared by being cleansed and dried.

Upon completion of the light therapy session, normally 20 minutes in duration, a moisturizing cream and anti-oxidant balm are applied to the treatment area. Generally, two to three treatments per week over a period of four to five weeks are recommended for best results.

It should be noted that, following a full course of treatment, the positive effects of LED red light therapy will continue to develop and manifest yielding a peak response from treated tissues after a period of several months.

Subsequent to all sessions, patients are able to immediately resume their normal activities.